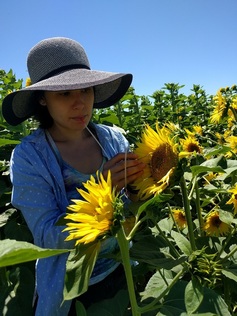 Jessica graduated from the University of California Davis in 2018 with a major in Animal Behavior. She worked to identify the pollen carried by individual forgers from experimental bumblebee colonies placed in the field in 2015 and 2016 to determine (1) what host plants were most collected by colonies over the season and (2) how host plant usage may have differed among colonies, and (3) whether the representation of different host plants in the collected pollen samples is simply reflective of their abundance in the local environment or (4) whether colonies appear to be "nutrient balancing" - that is, preferentially foraging for pollen that is particularly nutritious with regard to protein content or protein:lipid ratios. 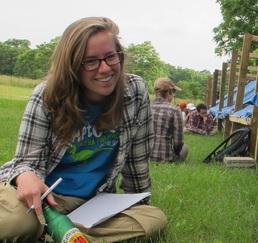 Staige graduated from the University of Virginia (2014) with a major in Environmental Sciences. She began working with me as an undergraduate researcher in August 2011, initially assisting with my research on the prevalence of parasites in bumblebee populations of northern VA. In 2012, Staige was one of ten students from schools across the nation to join Blandy Experimental Farm's REU Program. Through this fellowship, Staige investigated the manipulation of bumblebee host behavior by parasitoid conopid flies as well as the relationship between host body size and conopid fly pupal weight. For more details on this research, read our recent publication that resulted from this study. Staige returned to Blandy Experimental Farm during the summer of 2013 to conduct follow-up research with me for her elective senior thesis. She studied whether bumblebee species vary in their suitability as hosts for conopid flies. This work was funded by competitive grants she received from Sigma Xi, the Scientific Research Society, and UVa's Ingrassia Family Echols Scholars Research Fund. Our study was published in 2015 in Oecologia. Staige presented her research at the 2012 Annual Blandy Farm Research Symposium, at both the 2013 and 2014 Annual Environmental Sciences Research Symposium at the University of Virginia, and at a national Ecological Society of America conference.

Via the College Advising Corp, Staige has been working as a college counselor at Charlottesville High School, helping students to find their own path in higher education. ​
Clara Stuligross
Blandy Experimental Farm REU Program, 2013 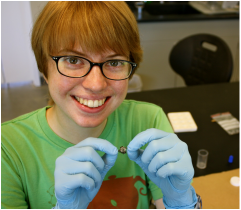 Clara graduated from Earlham College (2014) with a major in Environmental Studies. In the summer of 2013, Clara was a research fellow through Blandy Experimental Farm's Research Experience for Undergraduates Program. Clara's project investigated how increasing time spent away from the colony affects a bumblebee (B. impatiens) forager's risk of parasitism by parasitoid conopid flies. For more information about her project, see her abstract on the REU website. She worked on this project with RET fellow Lewis Bauer. Clara presented her work at the 2013 Annual Blandy Experimental Farm Research Symposium and at the 2014 Ecological Society of America national conference in Sacramento, CA. After graduating from college, Clara worked as a laboratory technician for Dr. Rufus Isaacs at the University of Michigan, and then  as a science educator at the Carnegie Museum of Natural History. Clara is currently a Ph.D. student in  Ecology at UC Davis.
Sarah McIntosh
University of Virginia, 2014-2015 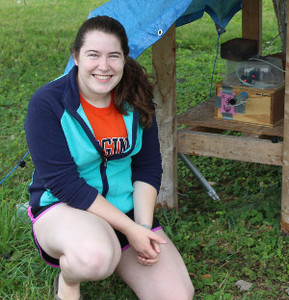 Sarah graduated from the University of Virginia in 2015 with a degree in Environmental Sciences. During the summer of 2014, Sarah was one of ten students from across the nation selected to participate in the REU Program operated by Blandy Experimental Farm. Through her fellowship, she used a an experimental setup involving a radio frequency system to investigate whether bumblebee foraging behavior changes in response to parasitism by parasitoid conopid flies. You can learn more about her summer research here.

Sarah continued her investigation into whether the pollen-collecting behavior of bumblebees is altered by conopid infections during the 2014-2015 academic year. She also participated in a newly established high school mentoring program through which she and I advised a high school student assisting with my ongoing work on parasitism in bumblebees.
Amber Slatosky
Blandy Experimental Farm REU Program, 2013 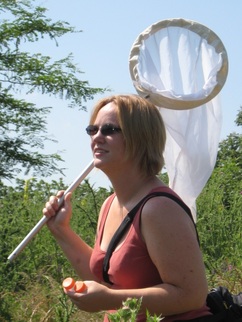 Amber graduated from Idaho State University with a major in Biology (2014). She was an undergraduate research fellow through Blandy Experimental Farm's Research Experience for Undergraduates Program in 2013. In this summer, Amber documented the overall prevalence of conopid parasitism during June and July and investigated how the size of conopid larvae is related to abnormal activity levels (i.e. torpidity) in bumblebee foragers. Amber spent many nights collecting bumblebees from vegetation in the field. You heard that right - many bumblebees spend the night away from their colonies, she found, and these bees were generally found to be parasitized by conopids. Amber presented her work at the 2013 Annual Blandy Experimental Farm Research Symposium and at the 2014 Ecological Society of America national conference in Sacramento, CA. To learn more about Amber's REU project and her other research endeavors, stay tuned to her research diary. 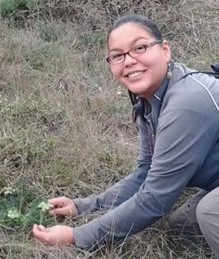 Jessica (San Francisco State University, Class of 2012) was one of ten students from schools across the nation selected to join Blandy Experimental Farm's 2011 REU Program. Through this research fellowship, Jessica investigated how bumblebee abundance and species diversity change in response to floral abundance and diversity. For more information on her REU project, see Jessica's abstract on the REU website. Jessica presented this work at the 2011 Annual Blandy Experimantal Farm Research Symposium and the 2011 Society for Advancement of Chicanos and Native Americans in Science (SACNAS) National Conference.

Jessica completed her Masters degree in Botany at Claremont University, funded by a competitive fellowship from the Ford Foundation, and became a Range Land Specialist with the Hualapai Nation in Arizona. Jessica was an accomplished enthnobotanist and an extraordinary person. She died in 2018 at the age of 31 as a result of senseless gun violence. Multiple funds to support underserved populations in science have been established in her memory, including one from Southern California Botanists. 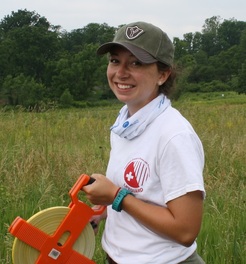 Courtney graduated from the University of Virginia (2014) with majors in Environmental Sciences and History. She joined my research team in the summer of 2013 at Blandy Experimental Farm as a field and laboratory assistant. Her work contributed significantly to data gathering efforts for a large field experiment that was designed to assess the impact of seasonal food scarcity on bumblebee colony growth and reproduction, and involved the monitoring of 24 live bumblebee colonies. During the summer, Courtney organized and led a team of people in the field to complete weekly comprehensive floral surveys of two large naturally flowering areas at Blandy.
​
Courtney continued to conduct research on parasitism in bumblebees in my laboratory during the 2013-14 academic year and designed a pollination laboratory for classroom use in a high school setting through a recently-launched high school mentoring program. During the summer of 2014, she worked for the Student Conservation Association in the Grand Tetons National Park. Courtney is currently working for the Museum of the Shenandoah Valley as an Educational Program Coordinator.
Chris Goslin
University of Virginia, 2012-2013 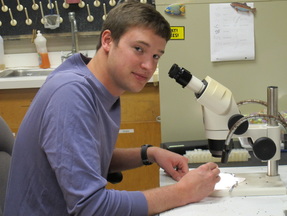 Chris graduated from the University of Virginia in 2013, having majored in Environmental Sciences with a specialization in Environmental and Biological Conservation. Chris assisted with my research on parasitoid conopid flies, which use bumblebees as hosts in the larval stage of their life cycle. Specifically, Chris (1) tracked the seasonal patterns of conopid fly infections in three common bumblebee species collected at Blandy Experimental Farm during the summer of 2012, (2) worked to understand whether various body size metrics are correlated in bumblebees, and (3) assessed how bumblebee body size may play a role in host selection by conopid flies. Chris's work has been instrumental in helping to resolve discrepancies in results produced between two years of study regarding the importance of host body size in parasitism by conopids. 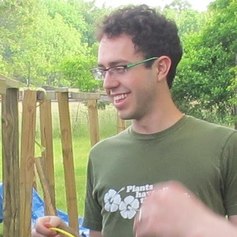 Kellen was the lead technician on a large field experiment the Roulston lab conducted on the response of bumblebee colony growth and reproduction to floral resource availability and how colony success may be influenced by parasitic infections. Kellen graduated with a degree in Biology from Earlham College in 2012 and subsequently worked as a technician with the Savannah River Site (SRS) on the Corridor Project, which examines how habitat corridors affect seed dispersal of herbaceous and woody plants. Kellen was an REU student at Blandy Experimental Farm in 2011; he worked with Dr. T'ai Roulston to study differences in pollen removal efficiency and pollination quality of different pollinators of Physalis longifolia. For more information about this project, see his abstract on the REU website. Kellen is now a graduate student in Biology at the University of New Mexico.
Megan Huff
Field and Laboratory Research Assistant, 2013 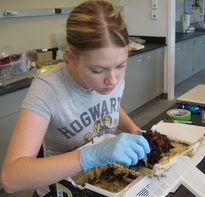 Megan is a recent graduate of Shenandoah University (Class of 2013) where she majored in Biology and minored in Kinesiology. Megan joined my lab at the end of July 2013 as a field and laboratory assistant. She worked on many aspects of my research that summer, including floral surveys, bumblebee colony monitoring, and dissections of bumblebee colonies. While a student at Shenandoah, Megan worked with Professor Laura Haubrick on research involving monarch butterflies. Specifically, she crafted an experimental design for examining milkweed growth rates in a greenhouse setting. She would like to pursue graduate education in the sciences, and is interested in projects rooted in evolutionary theory.
​
Lewis Bauer
Research Experience for Teachers Fellow, Blandy Experimental Farm, 2013 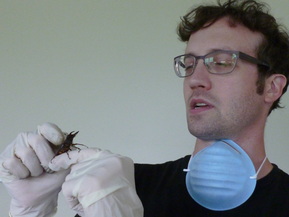 Lewis is... my spouse! Lewis is a Special Education teacher. During our time in Virginia, he worked at Charlottesville High School. In 2013, Lewis joined the Blandy Experimental Farm "Bee Team" ranks as a Research Experience for Teachers (RET) Program Fellow, funded by the National Science Foundation. Lewis worked on a project that used a radio frequency identification system to assess how the time bumblebees spend away from the colony foraging influences the likelihood that they will be parasitized by parasitoid conopid flies. Lewis and I brought the knowledge we gained from this experience to the high school instructional setting by engaging students in dissections and observational research. The RET grant allowed for the purchase of a dissecting scope to be used by CHS students to further examine bee biology and parasitism.
Nellie Carter
Laboratory Technician & Citizen Scientist, Blandy Experimental Farm, 2011 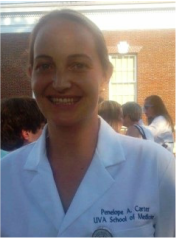 Nellie volunteered her time as a laboratory technician in the Roulston lab during the summer and fall of 2011. Nellie was instrumental in dissecting hundreds of bumblebee specimens and analyzing them for internal parasites (including Crithidia bombi, Nosema bombi, and parasitoid flies). Additionally, Nellie supervised a student researcher from a nearby high school who was analyzing local honeybee hives for the presence of the pathogen Nosema apis/ceranae.

​Nellie has since moved on to study an important terrestrial vertebrate - the human! She recently graduated from the University of Virginia's medical school. 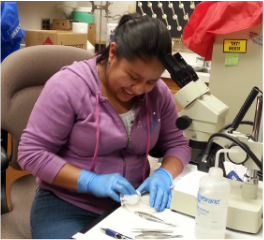 ​Lorena was a student at Charlottesville High School. Through a research mentoring program for local high school students established by graduate students in the Department of Environmental Sciences at UVa, Lorena worked in my laboratory as a student researcher. She helped to dissect bumblebee specimens caught as part of my research on conopid fly parasitism in bumblebees.
​