Bombus fervidus (the Golden Northern Bumblebee) forages on wild indigo. Photo taken at Blandy Experimental Farm, Boyce, VA.
This section of the website is undergoing updates to reflect current research activities. For some (slightly outdated) information on my work in this area, please see the Resource Availability page from my previous website: 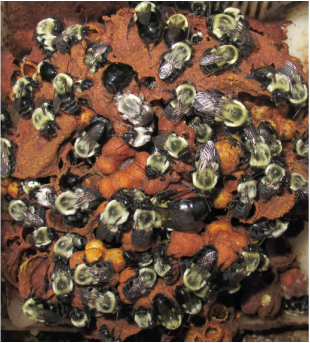 For species with long life cycles, the temporal distribution of resources is a particularly important aspect of habitat quality, but one that has been largely overlooked. Bumblebees (Bombus spp.) are social organisms which reproduce at the level of the colony. With colonies that develop for many weeks before reproducing, bumblebees have high nutritional demands. When food (i.e., pollen, nectar) is scarce, population size can be negatively affected through decreased colony growth and reduced or failed reproduction. Food shortfalls early in the bumblebee colony cycle may reduce colony size, which in turn could lead to lower reproductive success. Queen production, in particular, tends to occur only in very large colonies, presumably because many workers are required to gather the necessary resources for this energetically costly activity. Food limitation later in the cycle may also impair reproductive output, although large colonies may be capable of gathering enough resources to reproduce even when resources are scarce. To date, few studies have examined the influence that temporal variation in floral resource availability has on colony success.

Long-term studies suggest that mid-summer periods of flowering resource scarcity are becoming more pronounced due to climate change. This dynamic poses a potentially significant challenge for bumblebees with long colony cycles that extend into the late summer. Intensive agricultural landscapes may also lack season-long resources needed to sustain natural pollinator populations, with flowering being largely dictated by the crops that are planted.

As a postdoctoral researcher in the lab of Dr. Neal Williams at UC Davis, I am investigating how seasonal patterns of resource availability affect bumblebee colony (B. vosenenskii) demography. Currently, I am working on an NSF-funded project in which I am leading a large multi-year field experiment involving manipulations of available forage resources of bumblebee colonies in order to assess how vital rates (e.g. worker production and survival, and queen production) depend on the availability of floral resources (i.e. resource pulses) at different times in the colony cycle.

During the 2016 field season, we generated large wildflower plantings and caged them so that half (n = 7) of our bumblebee colonies were permitted to access these resources for a period of 3-4 weeks. These caged resources represented a "pulse" of pollen and nectar (in other words: food!) for the bees in a landscape that is otherwise nutritionally challenging.
​My awesome team of post-graduate technicians and UC Davis students and I used radio frequency technology to track the lifespan, size, and foraging activity of many individual bees in colonies that did and did not have access to these supplemental resources. The purpose of this very labor-intensive and detail-oriented work is to determine what effect a pulse of nutritious food has on colony development, and for how long those effects last beyond the existence of that pulse.